Seizures are a common condition in dogs, with up to one in twenty of our four-legged friends experiencing at least one fit or convulsion in their lifetime. With seizures being such a relatively regular occurrence, they can often happen while a dog is sleeping.

Add this to the sudden and jerky movements dogs can sometimes make as they dream, and many owners might wonder: is my dog dreaming, or are they having a seizure? And what can I do about it?

How do I tell the difference between a doggy dream and something more serious?

When dogs dream, they can often become intensely absorbed in whatever story their minds are showing them. Owners will be familiar with dogs rolling around, kicking, grunting, and twitching in their sleep—along with the stereotypical running or paddling motion.

If your dog is making these movements as part of a dream, it’s likely that they’ll only last for a few seconds, with your dog relaxing back into a calm sleep before any new movements. You may also see their eyes moving rapidly under their lids (with rapid eye movement (REM) being the term used to define the dreaming portion of sleep.)

However, if a dog’s sleep-moving or sleepwalking continues to persist for longer than thirty seconds or so, it may be a sign of something other than dreaming. Likewise, if the movement returns regularly and robotically without the dog relaxing into sleep afterwards, they may be experiencing seizures rather than dreams. A seizing dog’s movements are also likely to be stiffer, more rigid, and perhaps more violent than a dreaming dog’s.

There are also more obvious distinctions between dreaming and seizing dogs. If a dog is dreaming they can usually be woken quite easily, whereas a dog undergoing a grand mal seizure cannot. If a dog wakes up drooling heavily, confused, and unresponsive after moving in their sleep, it may be another sign of seizures rather than dreams. Seizing dogs can also pee or poop in their beds, as they are unable to control their bodies.

Is it ok that my dog twitches while they’re sleeping?

As discussed, dogs can be highly active sleepers—far more so than most humans. So don’t be too concerned if you notice your dog fidgety or twitching as they snooze. Like us, dogs progress through three sleep stages throughout the sleep cycle. These are short-wave sleep (SWS), non-rapid eye movement sleep (NREM), and rapid eye movement sleep (REM). REM is the stage of sleep most normally associated with dreams, and therefore also with movement.

Because dogs sleep and wake more frequently than us humans, they spend more time cycling through these stages, meaning that dogs more regularly enter REM stage sleep, even if they’re just taking a nap after a good walk.

Anecdotal evidence suggests that dogs who sleep tightly curled-up will tend to twitch more in their sleep, simply as a result of laying with their muscles tensed. And, just like human babies, puppies will often move and dream more in their sleep than fully grown dogs. 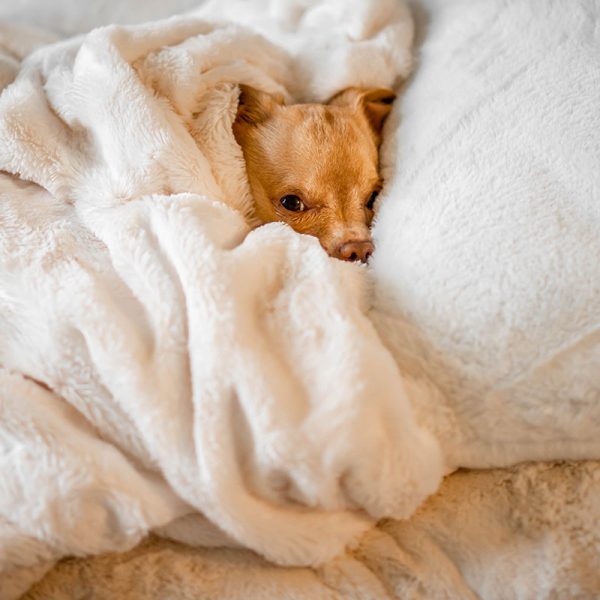 How to safely wake a sleeping dog

Dogs love their downtime, as it’s always best to leave and dog sleeping if you can. Some dogs can become agitated and startled when suddenly awoken, and may even become aggressive.

If there is a reason to wake your dog—for example, if you’re concerned about their behavior or movements—it’s important to make the process as less alarming for them as possible. Instead of touching or shaking them, try calling their name at increasingly loud volumes until they stir. If that doesn’t work, try making noise at distance from them, perhaps in a spot where they normally are fed.

If it becomes clear that a dog’s movements are not due to dreaming, and they are not able to wake up, it’s important to remain calm and continue to be careful in the way you handle your pet. Some sources recommend placing your hand or an object into a seizing dog’s mouth to prevent them from biting or swallowing their tongue—however, this is a myth, and is not necessary.

All you as the owner need to do during a seizure is to ensure that your dog is not in a place where they might cause themselves injury. It helps to continually speak calming and soothing words. When a dog comes-round after their seizure, they are also likely to need some calming and reassurance, as they’ll probably be quite confused about what has happened.

Are seizures more common in sleeping than waking dogs?

A 2018 study from the Journal of Internal Veterinary Medicine confirmed that, like humans, dogs are more likely to experience seizures when deprived of sleep. So while the time and triggers of seizures can be personal to individual dogs, ensuring a regular sleeping schedule is a good way to cut down on the risk for seizure-prone pups.

In general, seizures are always more likely to occur during fluctuations or changes in brain activity. This includes times when dogs are sleep deprived, but also when waking up or falling asleep, as well as during times of overstimulation and stress. According to Pet MD, this is why many owners notice a link between times when their dogs are resting or asleep and the onset of seizures.

When does a seizure turn into an emergency situation?

All seizures, when sleeping or waking, should warrant a visit to a vet. However, isolated seizures that last a minute or less are normally nothing to worry about—as long as a dog recovers without sluggishness or losing functionality.

On the other hand, if your dog has more than one seizure (known as cluster seizures) or if your dog seems to be struggling to regain full consciousness or mobility, make sure to get them checked out by your vet as soon as possible.

Seizures that continue for more than a minute without any sign of stopping are considered a serious medical emergency and require immediate treatment by a vet. While there’s not too much owners can do to bring a dog out of such a seizure, there are a number of things you can do to help. These include: