Despite recent improvements in animal healthcare, rates of canine cancer have never been higher. With the vast majority of today’s dogs making it to a wise old age, cancer is often an inevitable part of senior life for many pups.

Thankfully, CBD is providing a growing number of owners with a tool to relieve symptoms, and in some cases, directly slow the progression of disease.

Here’s our recommendations of CBD oils for dogs with cancer. Scroll down for the full product analysis.

CBD Oils for Dogs with Cancer 2021

What makes a CBD oil right for canine cancer?

CBD’s potential as a cancer and cancer-symptom treatment comes from its ability to stimulate the endocannabinoid system (ECS).

Found in dogs, humans, and almost all known mammals, the ECS controls inflammation across the body, as well as the release of key hormones and other signaling compounds.

In 2011, a review from the British Journal of Pharmacology on cancer and the endocannabinoid system found that:

“The available literature suggests that the endocannabinoid system may be targeted to suppress the evolution and progression of breast, prostate, and bone cancer as well as the accompanying pain syndromes.”

While not performed directly on dogs, a large number of clinical studies confirm that CBD and other cannabis compounds are able to target the ECS in exactly this way.

Among these compounds, two have drawn attention from researchers for how they target proteins associated with cancer growth.

In trials by U.S. company Cannabics Pharmaceuticals, CBC and CBG have shown anti-tumor properties, being able to penetrate tumor cells and initiate necrosis (tissue death) to a greater extent than other cannabinoids.

Because of this, all the CBD products for cancer that we recommend also contain significant amounts of both CBC and CBG.

We also take into account our overall scoring categories, which combine the features owners care about most, weighted by importance.

These include things like product label accuracy, THC safety, and previous customer reviews.

For the full details on scoring, take a look at how we calculate our CBD scores. 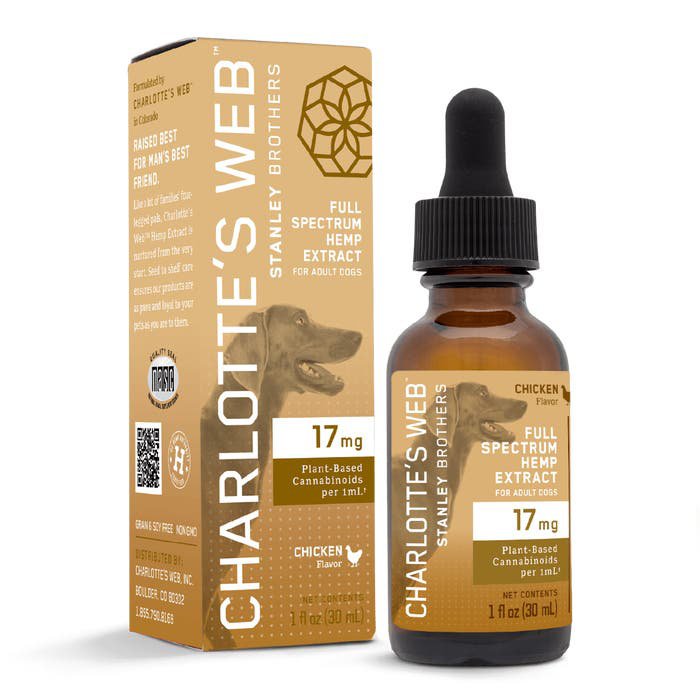 Charlotte’s Web features in a good chunk of our ‘best of’ lists thanks to their true full spectrum extraction, which contains all of the seven main cannabinoids.

Here, the brand earns our top choice for CBD oils for cancer with high amounts of CBG and CBC, as well as the usual pain and inflammation-busting benefits that come with any quality CBD extract.

This makes Charlotte’s Web a good option for owners looking to target symptoms of cancer as well as the underlying disease. Owners of senior dogs and those taking CBD as part of their end of life care should benefit from additional compounds like CBD-A, and CBN, which work with CBD to target inflamed tissues and joints.

A look at Charlotte’s Web owner reviews shows that many were impressed with the oil’s ability to support dogs with pain, joint and mobility issues, and pain-related depression.

We just wish there were more online testimonials for this brand, given their large reputation. That’s why they only scored a C in this category.

Use promocode COFD and get 25% off

Multiple award-winners Four Corners Cannabis are a solid choice for any dog, but they stand out as a supplement for dogs with cancer thanks to super-high levels of CBD and CBG—among the highest of any pet CBD oil on the market today.

As one of a small minority of cannabis brands to be promoted by the American Veterinary Association, Four Corners also has a great online reputation.

Owners posting on Trustpilot US give this brand’s CBD range an excellent 4.8 out of 5, from 677 reviews. Even more promisingly, there are clear indications that Four Corners works well for senior dogs, dogs with joint problems, and those with cancer, especially osteosarcoma.

David H.
“I am treating my German Shepherd dog for bone cancer. Along with many other things, this CBD seems to be helping.”

Jake
“I get the 2000 mg for my 11 yr Golden Retriever Jack. He has (hopefully had) cancer on his spine. The CBD tincture seems to help his pain. 2000 mg bottle is an incredible value”

Four Corner’s extract is made from premium colorado hemp, which includes high amounts of CBC and CBG along with CBD.

The extraction is carried in organic golden hemp oil, which is our favorite type of carrier oil thanks to hemp’s optimal ratio of omega 3 and 6 fatty acids. Using a high-quality fatty oil to deliver CBD increases the amount of extract absorbed into dogs’ bodies.

Despite all this good news, Four Corners is our runner-up pick due to their labeling accuracy, which is a little behind other brands.

We found that real levels of CBD inside the bottle could vary by up to 10 percent above or below the amount stated on the label. While this isn’t a huge issue, it can make products a little more difficult to dose.

Get 25% off your next order using the code COFD at checkout.

Our choice for ‘Best Value’ in this list and our complete rankings of the best CBD oils is Receptra.

We think this brand achieves an awesome balance of ingredient quality and value for money. That said, Receptra’s extract contains about half the CBC and CBG of Four Corners and Charlotte’s Web, so there is a sacrifice in potency that comes with the reduced price tag.

Levels of CBD, CBC, and CBG are still impressive, however, for a cost per mg of CBD that’s about half the industry average.

If you’re looking for a budget CBD oil that has particular relevance for canine cancers, we think this is the best option out there.

Just like cancer in humans, no two cases of cancer are the same, and dogs may need different combinations of treatment, including surgery, chemotherapy, radiation, and immunotherapy.

Likewise, dogs with cancer will use CBD in different ways—some responding so well that it becomes part of their primary treatment, while others use supplementation to offset symptoms and the side effects of other medications.

Owners and vets should work together to find the treatment plan that most benefits their dog, but evidence in favor of CBD’s role amongst pre-existing therapies is steadily growing.

In the future, this kind of clinical evidence may allow veterinary oncologists to reduce the amount of radiation used on dogs with cancer, instead prescribing courses of CBD and other cannabis compounds.

No one should be touting CBD as a cure for cancer, and recent discoveries about cannabis compounds don’t replace the need for traditional treatment options.

But there are a growing number of anecdotal reports from owners who were seemingly able to directly affect their dog’s cancer prognosis through CBD supplementation.

In human and mice models of cancer, CBD and other cannabis compounds (primarily CBG and CBC) have been directly associated with cancer cell reduction. Researchers believe that CBD may protect DNA inside cells from oxidative stress, a primary cause of age-related cancer and a possible route to slowing cancer progression.

CBD is minimizing reliance on drugs

Above all, CBD is an anti-inflammatory supplement, which means that it can be used to soothe a large variety of pains and discomforts.

Specifically, CBD can help dogs cut down on their usage of NSAID and opioid pain management medications, which cause unwanted side effects in many pups.

Read next: Our view on CBD oil for dogs with cancer

Treatments for common canine cancers are well established and effective, but they often carry negative side effects, and not all cancers are operable… continue reading>

Or try: How long can a dog live after being diagnosed with cancer?

It’s a big question—and one that has a variety of answers depending on when a dog is diagnosed, the specific type and stage of cancer, and the age of a dog… continue reading>

CBDOilforDogs.com is an independently owned professional review site. All our product recommendations are based entirely on our experts’ opinions and thorough consumer research. When products are purchased through our site, we may receive a commission. Ingredients and production processes change regularly. Always check manufacturer websites for the most up-to-date information.