Does CBD oil for dogs have any side effects? 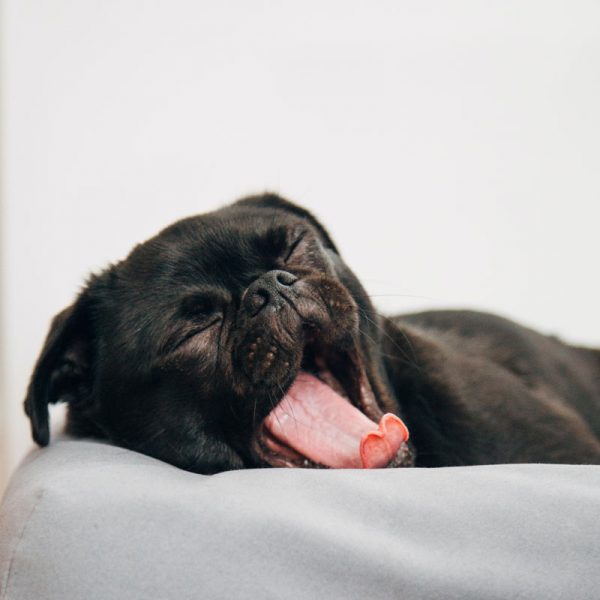 Repeated studies on cannabidiol, the full name for CBD, have shown it to be one of the safest, most compatible, and least toxic treatments available right now. According to a 2018 World Health Organization report, CBD is “well-tolerated, with a good safety profile,” and is unlikely to cause adverse reactions or dependency in either humans or animals.

There are of course exceptions to every rule, and it should be noted that extremely high doses of CBD have shown adverse effects in some tests (more on that below). But in general, CBD products for dogs fair very well when compared to many of the other drugs and treatments traditionally offered to dogs and their owners.

Here’s the rundown on possible side effects of canine CBD usage, as well as the potential risks of more traditional CBD alternatives.

CBD is a cannabinoid—a class of substances that interact with the body via the endocannabinoid system. Unlike opioids and other pharmaceutical drugs, interaction with this system means that CBD doesn’t directly affect the brainstem or areas controlling respiration. In terms of substance safety, this is a big plus, meaning that serious overdoses from CBD and other cannabinoids are highly rare.

Also in CBD’s favor is its half-life, which sits in the Goldilocks zone of around one full day (specifically, less than 12 hours for most dogs, and a little over 24 hours for most humans). A half-life of this duration means that dosages from the previous day shouldn’t negatively interact with the current day’s dose, adding to user confidence.

Finally, CBD is one of the many non-psychoactive cannabinoids derived from the cannabis plant, meaning that—when property isolated—CBD should have zero intoxicating effect. While CBD’s ability to reduce anxiety and inflammation is likely to induce a sense of relaxation, this certainly isn’t the psychedelic high most associate with weed. In fact, most CBD products for pets are produced from the hemp plant, not the marijuana plant, which means there’s a minimal presence of the high-causing cannabinoid, THC, to begin with.

Nevertheless, more minor side effects have been reported by some people and dogs. It’s not exactly clear why some experience these negative effects and others don’t, but researchers believe it may be down to a combination of high (or prolonged) dosage, genetic disposition, and CBD that has a low purity or is poorly produced.

If your dog does experience CBD side effects, they are likely to include:

Some studies do claim to have found a toxic level of CBD—but those levels are considerably high! A 1981 study on Rhesus monkeys discovered adverse effects, including liver and kidney weight increases, at daily dosages of over 30mg of CBD per kg of body weight, for periods of 90 days. Confirming this, a 2018 study on mice also found that a daily 30mg dose per kg of body weight for over a month or longer could result in decreases in circulating testosterone, as well as fertility issues.

In studies on humans and dogs alike, these sorts of toxic effects are rarely found. Instead, those using CBD to treat anxiety, schizophrenia, and childhood epilepsy disorders such as Lennox-Gastaut syndrome most commonly report drowsiness and minor appetite suppression.

Little research has been undertaken on toxicity for dogs specifically, which means any estimates are mostly drawn from data on other animals. But to be clear, dogs should never have any need for dosage levels as high as those given to the monkeys and mice in the above studies. Our dosage guide recommends beginning your dog’s treatment with an amount almost three-hundred times less (!) at 0.2mg of CBD oil per pound (so, roughly 0.1mg per kg).

Even though CBD is often sold as a supplement rather than a medication, its ability to interact safely with other courses of treatment is still being determined. This means that any person or pup combining their dose with other drugs needs to exercise caution, and should probably consult their vet.

There’s been some evidence that moderate consumption of CBD increases the potency of certain medications in your blood, in the same way that vitamin K and famously grapefruit is known to do—by blocking enzymes that aid in metabolizing of substances.

With current anecdotal and scientific data suggesting that CBD has a super low toxicity level, many believe that the supposed side effects of CBD can actually be attributed to impurities in CBD products, rather than the cannabidiol itself.

Right now, CBD ingredients for pets remain unregulated by the FDA, so it’s important to do your research and ensure you’re purchasing the best CBD products on the market. Ideally, you want to look at CBD oils and treats that are produced from hemp, not marijuana, and have very low or zero levels of cannabis’s other main cannabinoid, THC.

Side effects of CBD alternatives

Many owners turn to CBD because they’re unsatisfied with pharmaceutical medications prescribed by vets. Others are looking to recreate the benefits of drugs such as nonsteroidal anti-inflammatories (NSAIDs) which are often unsafe for dogs to take.

Because of this, it’s important to weigh the possible side effects of CBD against any risks and symptoms associated with dogs and other courses of drugs. Let’s take a look at some of the most common canine side effects reported with these CBD alternatives:

NSAIDs effectively reduce inflammation in dogs, making them a commonly prescribed treatment for pain due to injury, surgery, or chronic conditions such as arthritis. Not all NSAIDs are safe for dogs, requiring the FDA to monitor and approve certain active ingredients.

Possible side effects
NSAIDs can be harsh on the digestive systems of both humans and dogs, but dogs are particularly vulnerable to GI side-effects such as vomiting, lack of appetite, and diarrhea. Adverse effects can become far more serious when dogs are given NSAIDs designed for human consumption, such as aspirin, ibuprofen, and naproxen—which may result in liver and kidney damage. So, never give you dog non-pet approved medication without first consulting your vet.

Dogs as a species are prone to compulsive and neurotic behaviors, with some breeds particularly vulnerable to anxiety. As a result, many dogs have benefited from medications from mild sedatives or drugs that increase the level of serotonin in the body. The FDA has approved several antidepressant drugs for use in treating canine mental health, including clomipramine and dexmedetomidine, most often for separation anxiety.

Possible side effects
Depending on the category of antidepressant taken, dogs may become less alert, less willing to engage in play or socialization, and find it harder to transition between sleep and waking states. More seriously, serotonin syndrome is a risk for anyone using anti-anxiety medication for a prolonged period. Serotonin syndrome occurs when high levels of the neurotransmitter accumulate inside the body, and can cause shivering, fever, and issues with muscle function.

Opioids such as morphine and tramadol are often used inside the veterinary surgery, where they’re considered highly effective as a temporary treatment for acute pain. However, opioid drugs are also prescribed for home use by some veterinarians, which has led to a questioning of the efficacy of opioids as a widespread outpatient treatment.

Possible side effects
As with humans, opioids have the disadvantage of being tolerance-forming, leading to the need for higher dosages in order to maintain effectiveness. When dogs experience toxic doses of opioids, adverse effects can include pinpoint pupils, lethargy and drunkenness, and slowed breathing. Respiratory depression is the most serious common side effect of opioid use, which is classed as the slowing of the breathing cycle to the point where oxygen and carbon dioxide are not being processed by the body.

The majority of treatment courses for dogs experiencing repeated seizures include the use of phenobarbital and potassium bromide, though some dogs will only respond diazepam when given on a reactive basis.

Possible side effects
According to the Veterinary Center at Ohio State University, common side effects of phenobarbital include sedation and lack of coordination. Potassium bromide, on the other hand, has been known to cause rear limb weakness in rare cases.

(THC does not have a recognized use or benefit for dogs. In fact, it’s considered a harmful substance when it comes to canines. As a cannabis derivative, however, I’m including it here for reference.)

Unlike CBD, THC is a psychoactive cannabinoid, which means it’s responsible for creating the high or stoned feeling that is traditionally associated with cannabis. According to VCA Hospitals, the recently increased accessibility to cannabis across North America has unfortunately led to an increase in pets being accidentally exposed to THC.

Possible side effects
THC should never be given to dogs. While trace amounts are found in some CBD products, anything higher can cause pups to become disorientated, uncoordinated, or hyperactive. Pupils may dilate, and drooling may occur. Though rare, more serious reactions have been reported, including slowed breathing, reduced body temperature, tremors, and seizures.