CBD Sky is an international CBD brand that does lots of things well, but isn’t quite the best at anything in particular, meaning that they didn’t make it onto our list of the Best CBD Oil for Dogs. Here’s our full review of CBD Sky oils and chews.

See how (Brand) compares to other CBD oils for dogs in our review of the Best CBD Oil for Dogs.

Who is CBD Sky?

CBD Sky is an international CBD brand with a presence in both Richardson, Texas, and Manchester, UK. They only work with hemp that’s grown within the US on Department of Agriculture certified farms, ensuring that their source ingredients are always reliable, potent, and sustainable.

Looking at the large number of customer reviews on Google and Facebook shows you that CBD Sky maintains a firm commitment to customer satisfaction, and we like how they often go the extra mile to ensure that their users understand the science behind CBD. Every CBD Sky product comes with a QR code that you can scan with your phone to reveal further product details and the full production story.

CBD Sky’s broad spectrum oil is made from 100 percent American hemp and extracted via supercritical CO2 extraction, which removes the need to use solvents or alcohols in the production process, as well as allowing CBD Sky to more carefully control the cannabinoid profile of their oil. Looking at the independent laboratory tests for this Pet Hemp oil, there is zero THC, a good amount of CBG, and other cannabinoids at trace levels.

CBG is gaining more and more interest in the cannabis world for its impressive ability to fight inflammation, pain, and nausea. It’s actually a precursor to other cannabinoids, and when in its acidic form, can be broken down into CBG, CBD, THC, and CBC. In particular, CBG seems to reduce the inflammation associated with inflammatory bowel disease, as shown by studies on mice.

The standard bottle size of CBD Sky’s full spectrum oil is 250mg, with an approximate concentration of 5mg of CBD per ml, meaning there are roughly 50 full droppers of CBD per bottle, and an estimated cost per mg of CBD of 24 cents. (This price per mg goes down to around 0.15 cents if you pick up the 500mg bottle).

Thanks to its zero THC content, CBD Sky is able to offer worldwide shipping of their oil, including shipping to all 50 states.

“Our first purchase—purchased the oil to help with my Labrador’s epilepsy. So far so good!”

“He is very relaxed, anxiety levels have dropped considerably.” 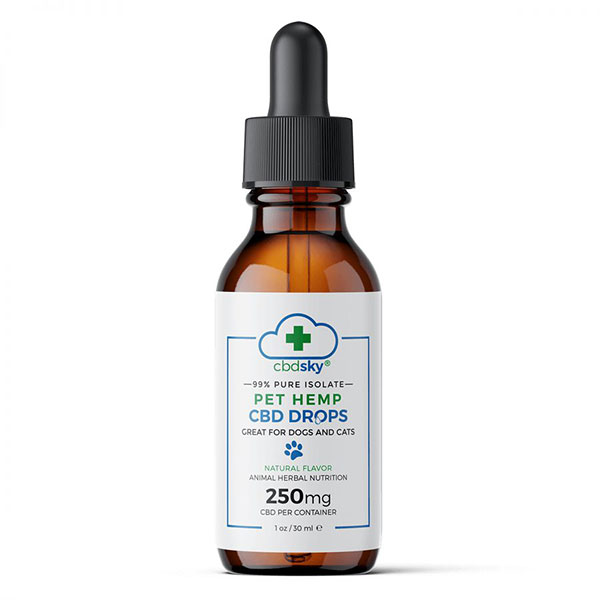 Unlike full spectrum oils, which contain CBD plus a producer-specific cocktail of supplementary cannabis compounds, CBD isolates (when extracted correctly) should contain only CBD.

This makes isolates a good option for the tiniest dogs who can only tolerate very small dosages, as owners can ensure they’re getting the maximum CBD possible. Isolates also work well for dogs who really can’t stand the taste of hemp, as they tend to have a somewhat milder flavor.

According to their independent lab tests, CBD Sky has produced an almost 100 percent pure CBD extraction, with zero THC and just a trace of CBN, which has a similar profile and set of effects as CBD.

CBD Sky offers this variant of their CBD range in a small, 100mg bottle. Given that CBD isolates are often more popular with CBD-first-timers, we like that CBD Sky have newcomers in mind here, with a tester option for those wanting to try the product out. However, they weren’t able to replicate their value for money at this product size, with a cost per mg of CBD of 40 cents perhaps making this one avoid if you’re particularly cost-sensitive.

“I use the oil on my 13 year old Lab. She is prone to seizures–since I have been giving the oil to her for about 3 months she has had only one small seizure–a definite improvement

“I thought my dogs were jerks!! Turns out they were stressed!” 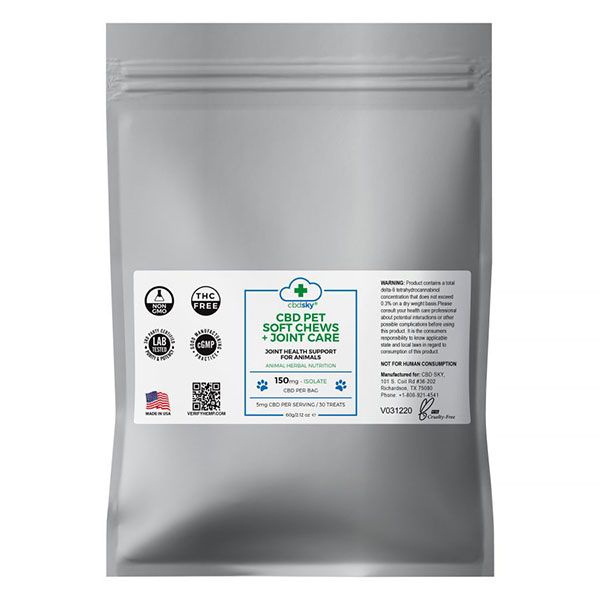 The other, non-active ingredients in CBD Sky’s treats are ok, with things like rice bran and tapioca starch being common ingredients in many doggo snacks and a good alternative to less savory fillers. But they’re not that healthy:

CBD Sky’s chews are infused with their isolate oil and natural meat flavorings, which should mean that even the pickiest pups will have no issues with the taste of these treats. Each individual snack contains 5mg of pure CBD, with 30 pieces in a packet, for a cost per mg of 23 cents.

Like many of the best CBD brands, CBD Sky’s treats don’t just stop with their CBD infusion. They also contain calcium, vitamin E, and a handful of other supplements commonly used by both dogs and humans to help maintain joint health:

CBD Sky is one of the few CBD brands that creates both a full spectrum and an isolate extraction, meaning that they have something to offer all pups, from the largest Great Danes who have been happily using CBD for years, to the tiniest Chihuahua’s and their owners who may be skeptical of the benefits of cannabis.

We’re big fans of CBD Sky’s commitment to using organic hemp and CO2 extraction processes, as well as the way they supplement their CBD treats with additional ingredients to promote mobility. The only downsides we can find with this brand are a lack of owner reviews and a slightly higher cost per mg of CBD than some other oil manufacturers. Check out the latest price of CBD Sky oils now.

CBDOilforDogs.com is an independently owned professional review site. When products are purchased through our site, we may receive a commission. Ingredients and production processes change regularly, so always check manufacturer websites for the most up-to-date information.

All of our unbiased product recommendations are based on our experts’ opinions and thorough consumer research, including our list of the Best CBD oils for dogs.