CBD Oil for Dogs With Separation Anxiety: Does It Really Work? 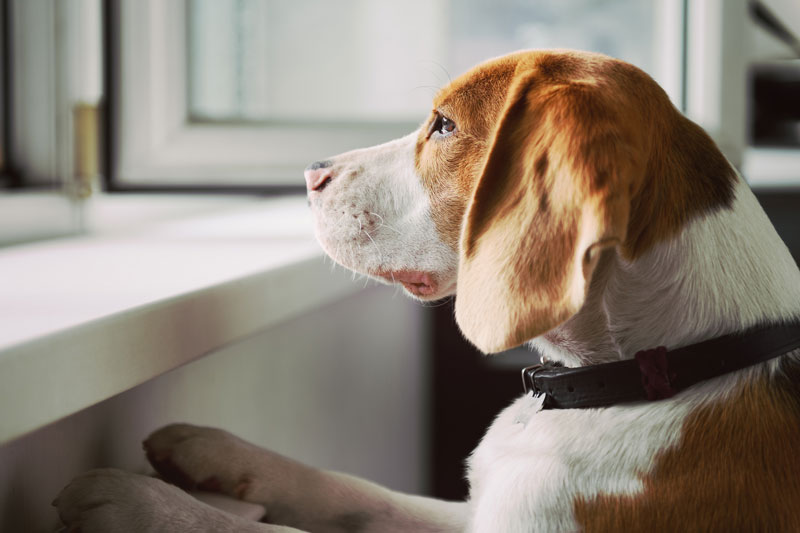 It’s one of the industry’s headline claims: that CBD products can help your dog deal with their separation anxiety. But what’s the evidence for this, and do most owners actually notice a difference?

With separation anxiety being a leading cause of daily discomfort in the lives of millions of dogs, there’s little room for vague pronouncements or misleading marketing.

Let’s look at the hard science, and how trustworthy the reports of CBD’s effectiveness actually are.

Canine separation anxiety refers to dogs that become disproportionately upset when separated from a member of their family—usually one particular person (or fellow pup) with which the dog has developed an unhealthy attachment.

A dog’s anxiety may have one or more stress triggers related to separation. For example, a noise like a car engine starting, a certain door in the house being opened and closed, or even a time of the day when family members typically leave the home. Once triggered, separation anxiety can present in excessive barking or whimpering, going to the bathroom inside, and destructive behaviors that only occur when the dog is left without their favorite person.

Despite its upsetting nature, separation anxiety is by no means a rare disorder in dogs. Behind disproportionate aggression, separation disorders are often reported to be the second most common behavioral problem in dogs. But According to the ASPCA, there is no conclusive evidence for exactly why dogs develop separation anxiety, or what the pre-warning signs might be.

However, we do know that dogs who live in more than one home across their lives—especially those adopted from shelters—are more prone to behavior problems related to separation issues. As such, it’s thought that separation anxiety is often a result of trauma related to the loss of an important person (or animal) in a dog’s life, as well as previous long-term confinement or isolation.

Less dramatic changes can also trigger the disorder, such as a change in the family makeup, or a new routine. But other commonly held theories about separation anxiety do not hold up in studies. For example, spoiling activities, gender, or the presence of other pets in the home have not been associated with separation anxiety in a clinical setting. Likewise, it’s not clear that early separation from a mother will necessarily lead to the future development of separation anxiety.

When a dog (or any mammal, including humans) takes CBD oil, cannabinoids derived from the cannabis plant interact with receptors the body’s endocannabinoid system. Named CB1 and CB2 receptors, these elements of the endocannabinoid system are thought to be closely linked to bodily homeostasis—the control of inflammation, mood, sleep, and other variables related to external stimuli.

By ensuring their CB1 and CB2 receptors have a ready supply of cannabinoids, the theory goes that a dog should be better able to handle the stress triggered during a separation anxiety attack, giving both you and them more of an opportunity to find better training systems and a stable day-to-day routine.

Under the influence of CBD, dogs should feel calmer, more relaxed, but not ‘high’, as all properly produced CBD oil for dogs should contain no more than 0.3 percent THC—the psychoactive ingredient in cannabis products. This mindset should make dogs more receptive to training techniques designed to mitigate destructive or upsetting behaviors.

Animals studies comparing CBD with other anti-anxiety medications have confirmed this idea, finding that it produces effects consistent with those of diazepam (valium) and other common anxiolytic drugs. Unlike these drugs, however, CBD is not mediated by the activation of benzodiazepine receptors, which come with their own unwanted side effects.

Through CB1 and 2 receptors, CBD can also act on the serotonergic system and the release of serotonin—the functioning of which is correlated with anxiety, depression, and mood disorders. Serotonin is popularly associated with boosts or spikes in happiness and positive feeling, but in reality, the serotonergic system plays a wide role in emotional stability and the ability to deal with stressful events.

There’s a tonne of clinical evidence for a good association between CBD and anxiety reduction in studies on both humans and mice. But, as dogs aren’t traditionally used as experimental subjects, studies looking specifically at pups are thin on the ground. When researchers do look at the effects of CBD on dogs, they tend to focus on issues with very clear presentations and symptoms lists, such as seizures, epilepsy, and arthritis.

A comprehensive literature review compiled in 2015 found experimental and clinical evidence that conclusively demonstrates CBD’s efficacy in reducing anxiety behaviors related to multiple disorders, including PTSD, GAD, PD, OCD, and SAD—in human subjects. According to the authors, “CBD potently reduces anxiety or fear when it is experimentally induced.”

Last year, a study testing the effects of CBD on mice who were presenting anxiety behaviors found that CBD decreased the anxiety response of all mice tested across several behavioral tasks.

A 2011 study from the Journal of Psychopharmacology on the use of CBD with (human) participants suffering from generalized social anxiety disorder found that CBD was associated with significantly decreased subjective anxiety, as well as improvements in biological markers of anxiety disorders.

Perhaps most relevant to separation anxiety, though, is a 2011 study on rats which showed that CBD (as well as diazepam) is able to positively affect the responses of animals in contextually conditioned fear paradigms. In other words, when animals learned to associate certain contexts or conditions with a fear response—as is the case with separation anxiety—CBD helped them to reduce the level of discomfort they experienced.

CBD Vs other types of anxiety therapy

CBD oil for dogs is almost always more beneficial when paired with other tried-and-tested therapies. Whether its CBD a supplement for joint massages for pups with arthritis, or CBD a supplement for routine-building for those prone to seizures, replacing traditional techniques with CBD is unlikely to be as effective as combining both into one treatment plan. 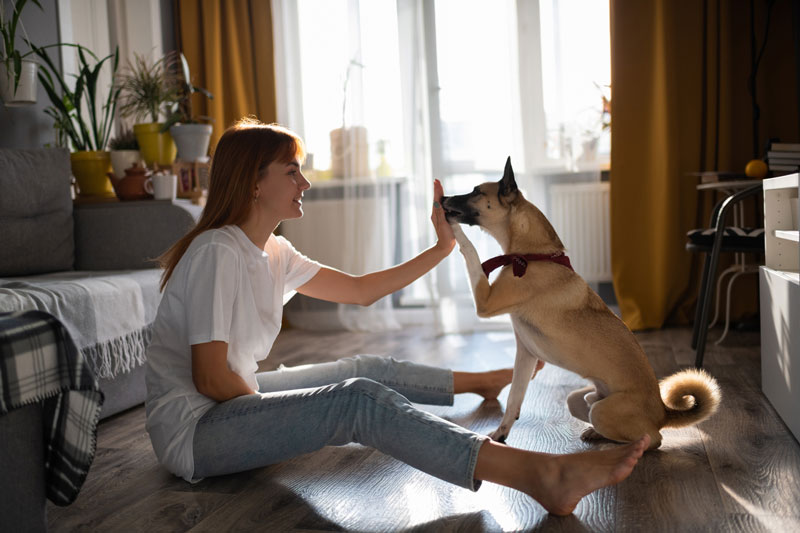 All of this means that, despite CBDs’ potential as an anti-anxiety treatment, it shouldn’t be the only thing you try out with your dog. Specific types of training—especially behavior modification, crate training, and desensitization—is a proven way to treat separation anxiety. Here, CBD may help increase susceptibility, and reduce the number of training sessions needed for the new routines to bed-in.

In fact, despite separation anxiety’s fearsome reputation, dogs with milder cases of the disorder may be highly receptive to CBD plus some simple counterconditioning and desensitizing measures. According to the Animal Humane Society, counterconditioning is a training process that determines the exact characteristics of a situation that provokes a pet’s negative response, and slowly building out positive connotations for each of those characteristics.

For separation anxiety, counterconditioning is likely to involve a period of close observation of the dog’s triggers. The Journal of the American Veterinary Medical Association reports that the dog’s distress levels are often dependent on the degree of attachment to the absent figure, so ideally, this stage should be carried out by someone other than the person who the dog has become hyper-attached to. This will allow you to see the full spectrum of anxiety symptoms.

(If it’s just you the owner and your dog at home, consider investing in a home-camera, which will allow you to playback footage recorded during your absence, and find out exactly what your pup’s been up to!)

Once the characteristics/triggers of your dog’s particularly separation disorder are clearly identified, your pup can (1) become desensitized to these triggers through a course of CBD treatment, and (2) learn to re-associated these triggers with positive things, such as treats and toys.

Associations can be developed in different ways, depending on the trigger. If it’s a certain noise that normally only occurs as you leave the house, you might gradually habituate your dog to the sound at other points in the day. Another popular method is to leave your dog with a lengthy puzzle or activity, every time you leave the house. This might take the form of a toy stuffed with food—for example, a KONG toy that’s be stuffed are pre-frozen, to make the good stuff harder to access. Aim for an activity that lasts over 20 minutes, to keep your pup absorbed for a decent period in your absence.

So, does CBD actually reduce separation anxiety in dogs?

Spend some time researching the anecdotal evidence online, and it’s likely you’ll be able to find owner experiences that argue both for and against CBD’s effectiveness in treating separation anxiety.

Plus, for every glowing recommendation or firm advisory against CBD, there are experiences such as this one from Zuri Davis and her dog Bishop, who did notice some improvements after taking CBD, but were 50/50 on exactly how much of a role the cannabis product actually played in moderating Bishop’s behavior.

All of which goes to say that every dog is different, and the only real way to know if CBD will help your pooch’s separation anxiety is to try it out yourself. The science is absolutely there, as well as plentiful reports of success in both humans and dogs alike. But there’s always the chance that your dog simply doesn’t respond to CBD, or that their condition is beyond the level at which CBD can help.

Even if CBD doesn’t end up solving a dog’s separation anxiety, it may have enough of an effect to make them more receptive to training, which can give overwhelmed owners more space to reset and move forward.

What’s the best way to introduce CBD to my dog?

Our dosage guide recommends starting with a low, daily dose of around 0.2mg of CBD per pound of your dog’s body weight—so that’s 10mg for a 50-pound pooch. From there, it’s all about careful observation and owner discretion. If it seems like your dog is responding well, then stick with the dosage; if there’s no obvious change, then slowly raise the dosage (within reason) until improvements occur.

As for dosage schedules, much will depend on the severity of your dog’s separation anxiety, how long the symptoms occur before and after separation, and how often you need to leave your home. If your dog is experiencing panic for an hour leading up to your departure, or can’t calm down when you return, then you may want to look at a once or twice-daily dosage.

If it’s more a case of your dog acting out when you leave unexpectedly or for an unusually long period of time, then a single dose or series of one-off doses beginning around an hour before you leave might be the best course of action.

For more, here’s our post on the benefits of a consistent daily dose of CBD, versus one-off, targeted hits.