CBDFx is a well-regarded and still-growing CBD brand, which has accumulated an impressive number of owner testimonials in a short space of time. We like the attention to detail CBDFx demonstrates with their carrier oil, opting to use organic coconut oil, which is a dietary supplement in its own right. Here’s our full review of CBDfx and their CBD products for pets.

See how CBDfx compares to other CBD oils for dogs in our review of the Best CBD Oil for Dogs.

Originally operating out of the San Fernando Valley, Ali Esmaili and Jameson Rodgers launched CBDfx in 2014. By 2020, they’d experienced insane growth, becoming the fifth-largest privately held CBD company in the world and employing more than 100 committed cannabis experts. Much of this success can be attributed to a continued commitment to small-batch principles, such as value for money, sustainable farming, and only working with organically-grown, pesticide-free, and non-GMO cannabis plants.

However, CBDfx’s growth is almost solely based on the human CBD market, where they offer a crazy range of products including recreational products like vape juice and gummies. For dogs and other pets, CBDfx have adapted their extraction, using a lower concentration oil that they offer in 3 different sizes to help owners dial in dosages for their dog’s weight and needs. 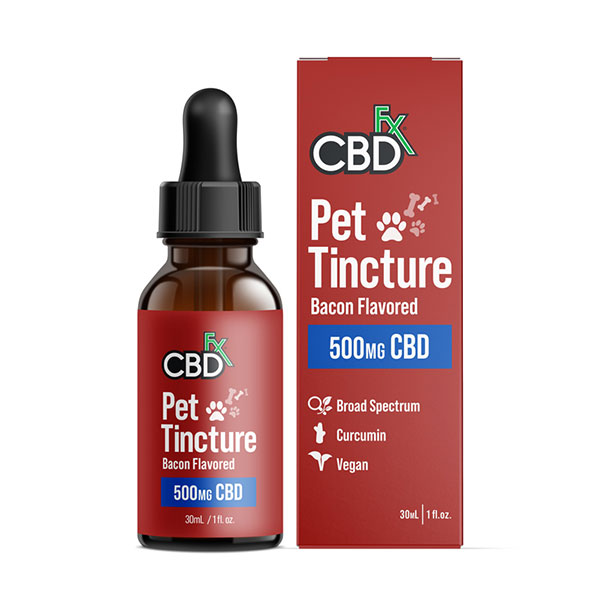 Proudly cultivated in the US, CBDfx has decided to infuse their pet CBD with a natural, but vegan, bacon extract. While not all dogs have issues with accepting the taste of CBD, a bacon flavoring should help those more hesitant pups take their supplement without issue. They may even become excited when it’s time for their dosage.

Alongside the bacon flavoring, this CBD product is further enhanced by curcumin, which is the active component of turmeric. Studies on curcumin have shown that it can produce the same anti-inflammatory effects as NSAIDs, especially in people and animals with inflammatory conditions such as arthritis. One recent study comparing the two substances found that 94% of those taking curcumin and 97% of those taking diclofenac (NSAIDs) reported at least 50% improvement. While the study was small and only lasted a month, it’s a promising result, especially considering how turmeric has been used for thousands of years in naturopathic and herbal remedies.

Note: You can pick up CBDfx’s pet oil in three different sizes. It will help to consider the size, weight and needs of your dog when making a purchase, however, CBDfx does a good job of maintaining value for money across each size.

“My 37 lbs, Indian pariah dog is leash reactive and anxious around other dogs and in new situations. I give him 0.25mL twice daily and it has improved his ability to focus.”

“Our 4 year old beagle started having seizures this year and just recently his hips started bothering him. Within a day of adding this to his food, he is back to playing and jumping on the couch!”

“I have been using CBDfx myself for some time and have been very pleased with the results. One of our dogs has a small limp from a knee injury and his vet suggested he try CBD as well. He loves the taste (we apply it on top of his food) and has been much more playful after a week of continuous usage.”

CBDfx will ship your order for just $3.50, or for free if you spend a minimum of 35 dollars, which means that the medium and large sizes of the pet CBD oil will ship free. For destinations within the contiguous United States, they estimate a not-too-shabby shipping time of between 5 and 8 days.

For such a large CBD company, it’s a shame that CBDfx doesn’t offer a greater range of products for pets. However, the oil that they do produce is a great option for those looking for pure CBD with added flavorings and supplements. A quick browse through the brand’s many owner testimonials will tell you that opting for a wholly organic CBD product (such as this one) is often the way to elicit the best results in your pup. View the latest prices of CBDfx oils now.

CBDOilforDogs.com is an independently owned professional review site. When products are purchased through our site, we may receive a commission. Ingredients and production processes change regularly, so always check manufacturer websites for the most up-to-date information.

All of our unbiased product recommendations are based on our experts’ opinions and thorough consumer research, including our list of the Best CBD oils for dogs.